Tales of Fire in the Belly: Hudson Bay Adventure

In the summer of 2016, the four of us– Mark Heiman, Mike Heiman, Allison Heiman, and me, Laura Gundlach– all embarked on a huge adventure, canoeing from the Boundary Waters in Minnesota all the way to York Factory on Hudson Bay in northern Manitoba, Canada. The trip ended up encompassing over 1200 miles and took 78 days. 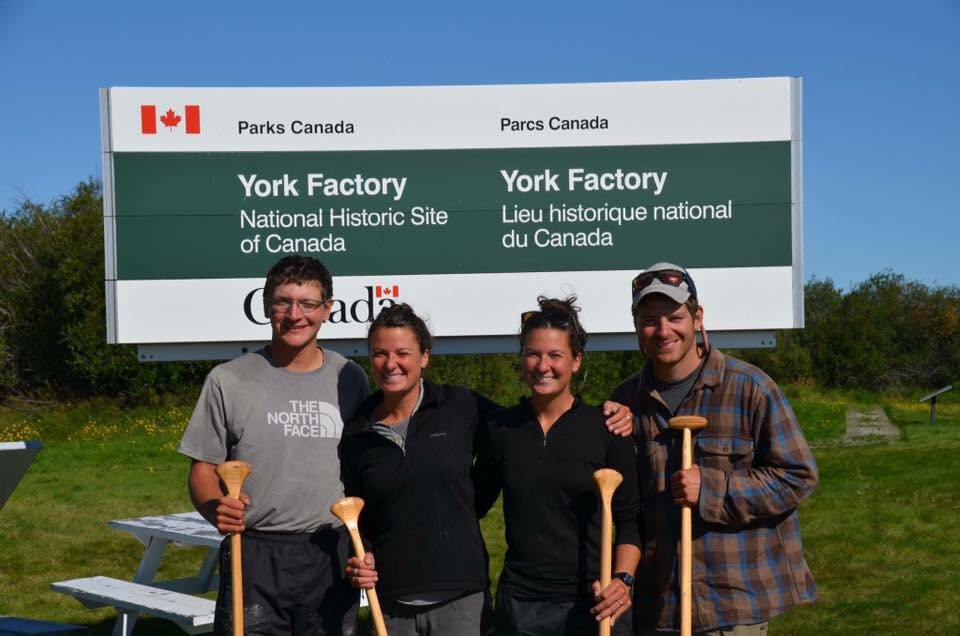 The trip started as a dream of Mike’s many years ago, and after he and Allison got married and bought two canoes he enlisted Mark, his younger brother, and me, Allison’s twin sister, to go on the trip with him. We spent almost a year planning and getting all the gear and supplies needed for the trip and portaged from the Heimans’ house in Ely to start the trip early last June.

The first leg of our trip spanned through the Boundary Waters and Voyageurs National Park in northern Minnesota. We all had been in the BWCA on short trips, so it was familiar territory. Leaving Voyageurs, we crossed into Canada and open public land. On the public land finding acceptable places to make camp was sometimes a challenge, as well as navigating and locating portages. In one instance we had about a half mile portage through unmarked forest, with up and down terrain, raining, and buggy, which took us five hours– probably one of our hardest experiences of the trip!! We stopped for a few night in the town of Kenora, and then moved onward toward Woodland Caribou Provincial Park.

In Woodland Caribou we had some really great fishing and also some hard portages through areas burned out from forest fires. We also met a group of guides and were able to spend a night at a beautiful remote fishing lodge. We also got our first resupply of food there. Food was always on our mind, and making a meal revolved around our Littlbug stove. We truly loved our Littlbug! 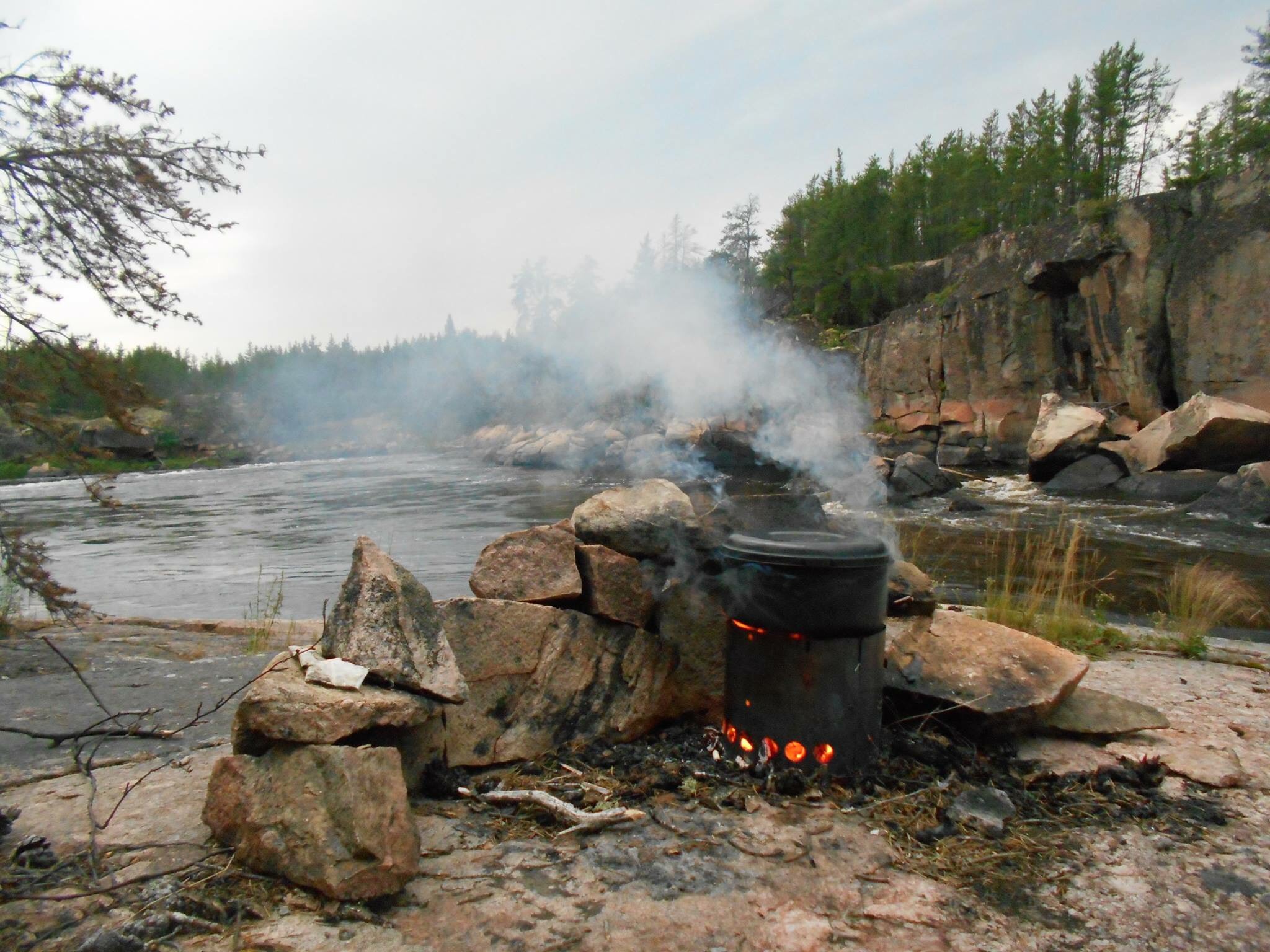 We got the Littlbug specifically for this trip because of how fast and efficient it is, how small it packs down, and no need to bring fuel because it is wood burning. 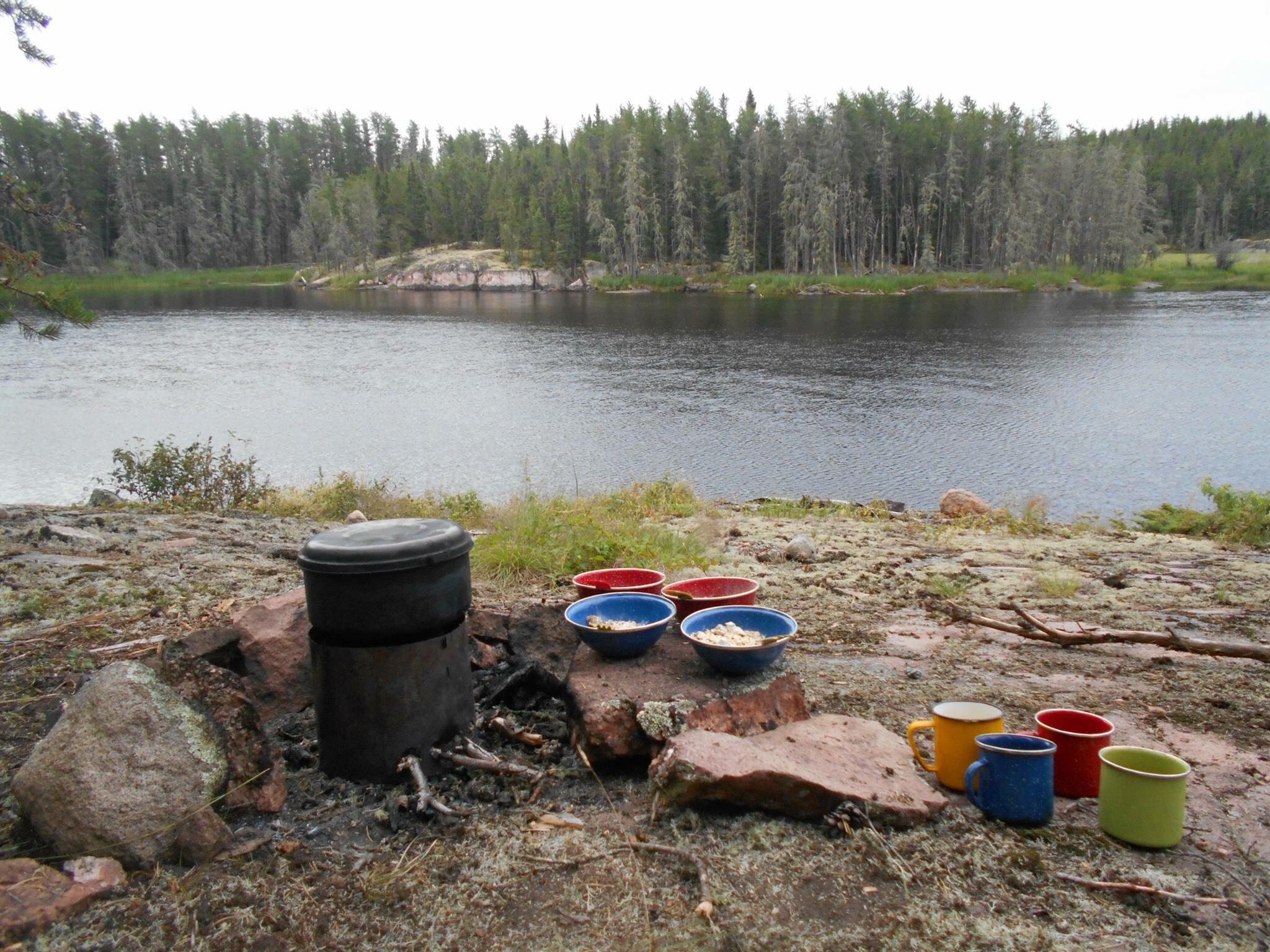 We just had to put it together and start a fire under the pot to cook food on. In a few minutes the water would be boiling and ready to add to our meals.

Leaving Woodland Caribou after about a month in, we crossed into Manitoba and started paddling down the Bloodvein River. The Bloodvein ended up being one of our favorite parts. None of us had any real experience with whitewater or rapids, so it was a learning experience and stressful at times, but really fun too. There were a few times when our canoes tipped or we had tricky moments lining, but we had beautiful weather and campsites.

The Bloodvein emptied into Lake Winnipeg. Lake Winnipeg was often a series of big crossings from one point to the next- always nervous that the wind and waves would pick up when we were stuck in the middle. We often did get windbound and would spend the day camped on the beach picking wild peas and berries and sleeping. When we finally reached the north end of the lake we spent a few nights at Norway House before starting down the Hayes River.

The Hayes was much different from the Bloodvein– bigger and stronger, and the water was low, making the rapids pretty tricky. We spent a lot of time scouting, looking for portages, and wading through the shallow rapids. Our scariest moment of the trip happened on the Hayes. After a morning of navigating through tough rapids, Allison and Mike started to run another set. Watching from the top, Mark and I could tell something was wrong and in the blink of an eye (literally!!) Allison, Mike, and all their stuff had fallen out and their canoe was wrapped around a huge rock. We thought the trip was over, but there were no holes and we were lucky enough to be able to pop the canoe back into shape and continue the rest of the way. 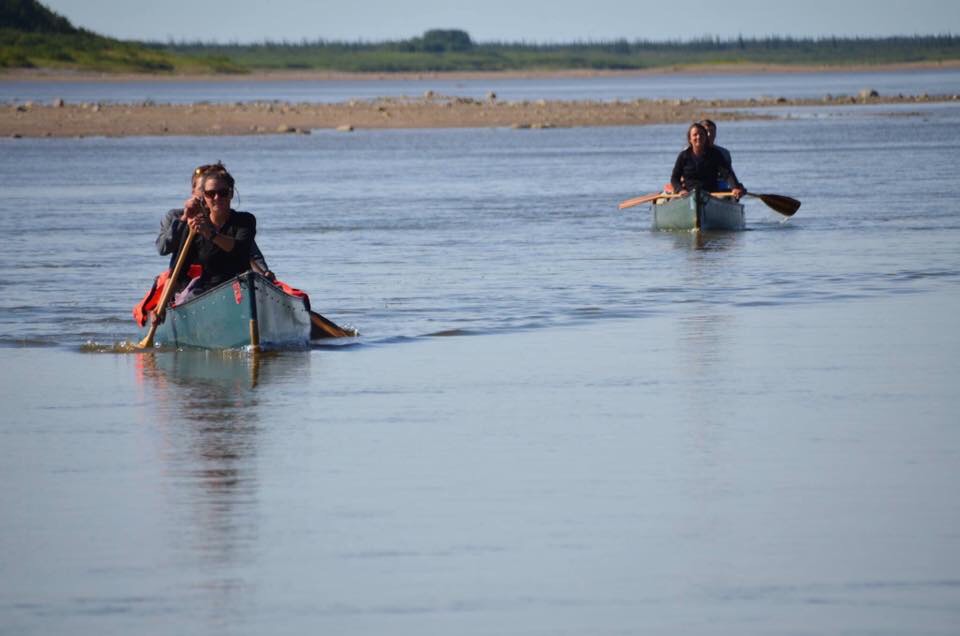 Our last night of the trip was very exciting. We decided to paddle through the night to get to York Factory in time to be picked up by float plane the next afternoon. That night we saw a black bear, the Northern Lights, and played with seals in the early morning. We arrived at our end point totally exhausted but so happy! We took a plane ride out, a 36 hour train ride to Winnipeg, and then a drive back to Ely. Our Hudson Bay Trip was an amazing experience that we think and talk about all the time, and hope to do again someday!

What's the Fire in Your Belly?

Send your story to us and see it here!  Click here to see the Littlbug Stove that Laura, Mark, Mike and Allison used.